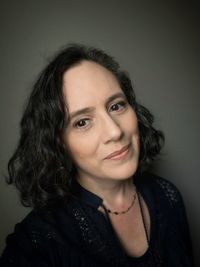 Hello! My name is Adriana Guzman. Back around the end of April in 2018, I received the news you never want to hear. My youngest sister got diagnosed with breast cancer. She lives in Colombia (South America). She was only 28 years old. As part of her journey, her doctor ordered a genetic test because my mom had also breast cancer in 2015. The test came back positive for BRCA2. Per her doctor's recommendation, I got tested as well here in Omaha. Four long weeks later my result came back. I was BRCA2 positive too. That’s when, without knowing, my journey began. Without thinking twice, I almost immediately made the decision of having a prophylactic bilateral mastectomy and an oophorectomy. My surgeon still wanted me to have an MRI “to prevent surprises during the surgery” she said. The MRI showed an abnormal area that needs further evaluation however my doctor told me that most of the time is nothing. Less than two months later I found out that unfortunately mine wasn’t on that group. I had my surgery and woke up diagnosed with breast cancer. That was August 7th, 2018 which also was our wedding anniversary. Started chemo in October of 2018. Finished it in February of 2019. Exchange surgery and then radiation, which I finished in June of 2019. I also had another surgery in December of 2019. During all that time we were surrounded by such an amazing group of friends, who pitched in to come with me to my chemo treatments, doctor appointments, cooking/delivering meals, picking up our youngest boy from school. I learned about Project Pink’d on the first day of chemo when I received the Project Pink’d chemo bag. I was so grateful. That day I felt that I wasn’t alone. That wasn’t the only “gift” I received from Project Pink’d. I also received Project Pink’d financial help which was a blessing during those stressful times. I have gone to the Project Pink’d Yoga classes and the walking club. I wanted to wait until I thought I was ready to apply to Dare to Thrive. I feel so blessed to be part of this experience. It offers us a space to talk and connect through our unique journeys of surviving and thriving.